Addiction research in Canada suffers from geographic isolation of research groups as well as limited communication between service providers and academic research teams.  This has hindered intervention research and translation and incorporation of evidence into prevention and treatment programs.  To address these gaps, the Canadian Institutes of Health Research (CIHR), through its Institute for Neurosciences, Mental Health, and Addiction (INMHA), has developed the Canadian Research Initiative in Substance Misuse (CRISM).

CRISM is a 5-year initiative and was modeled, in part on the US National Institute on Drug Abuse’s Clinical Trials Network.

CRISM was designed to facilitate communication and collaboration among addiction service providers, researchers, and policy-makers.  In September 2015, four regional CRISM Nodes, one each located in BC, the Prairies, Ontario, and the Quebec/Martime regions, began operations.

In order to address our objectives, we have formed a Prairie CRISM Node to link together individuals in Alberta, Saskatchewan and Manitoba who are interested in working toward accomplishing these goals. 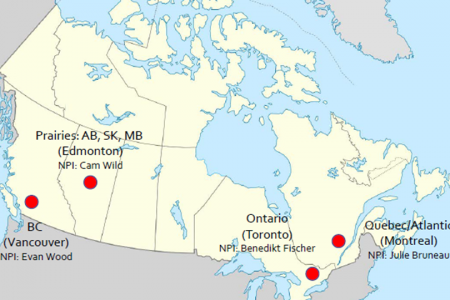 About the CRISM British Columbia Node

The CRISM BC Node is a network of over 100 individuals representing patient, family, and recovery advocacy groups as well as policy makers, health care and service providers, and research scientists affiliated with the BC Centre for Excellence in HIV/AIDS, the BC Centre on Substance Use, the University of British Columbia, and Simon Fraser University among others.

The BC Node seeks to collaborate with provincial health authorities, the Provincial Health Services Authority, the First Nations Health Authority, and the BC Ministry of Health in translating scientific evidence to inform provincial health policy. To ensure that research priorities align with lived experience of those affected by substance use disorders, we have well-established partnerships with community and advocacy groups, including the BC Association of People on Methadone (BCAPOM), the Vancouver Area Network of Drug Users (VANDU), the Western Aboriginal Harm Reduction Society (WAHRS), From Grief to Action (FGTA), and Moms United and Mandated to Save the Lives of Drug Users (mumsDU). Our efforts to establish and promote linkage to treatment providers, health system administrators, and government policy makers, as well as our training infrastructure and our national and international collaborations ideally position us to undertake collaborative research and implementation of evidence-based therapeutic approaches as part of CRISM.

The BC Node Team

About the CRISM Prairie Node

Alberta, Saskatchewan, and Manitoba have excellent researchers investigating substance misuse/addiction interventions (including prevention, harm reduction and specialty-based addiction treatment) delivered in the clinic, the community, and in academic research settings.  Each Province funds treatment and prevention of substance misuse/addiction and has developed strategic plans through their respective Ministries of Health and Regional Health Authorities.  But to date, these assets have operated either in isolation, or as part of small provincial teams.

The CRISM Prairie Node already has over 160 members, including investigators, system and program managers, policy makers, and consumer advocates, each of whom recognizes the need for enhanced regional collaboration to address substance misuse/addiction, and who have committed to participate in a Prairie regional CRISM Node.

About the CRISM Ontario Node

About the CRISM Quebec-Maritime Node

The CRISM’s Quebec-Maritimes Node (QMN) combines the expertise of researchers, clinicians, and knowledge users from Quebec and the Maritime provinces. We aim at identifying the specific needs and priorities of these provinces, and generating evidence-based knowledge according to real needs through research and collaborative projects.

We also contribute to the development of interventional research-based practices and policies with a Canada-wide perspective in mind, to ultimately improve quality of care and quality of life for all Canadians living with substance misuse.

The QMN members are working on multiple projects aimed at accelerating the transfer of scientific knowledge into better addiction treatment approaches, including both pharmaceutical and psychological interventions.